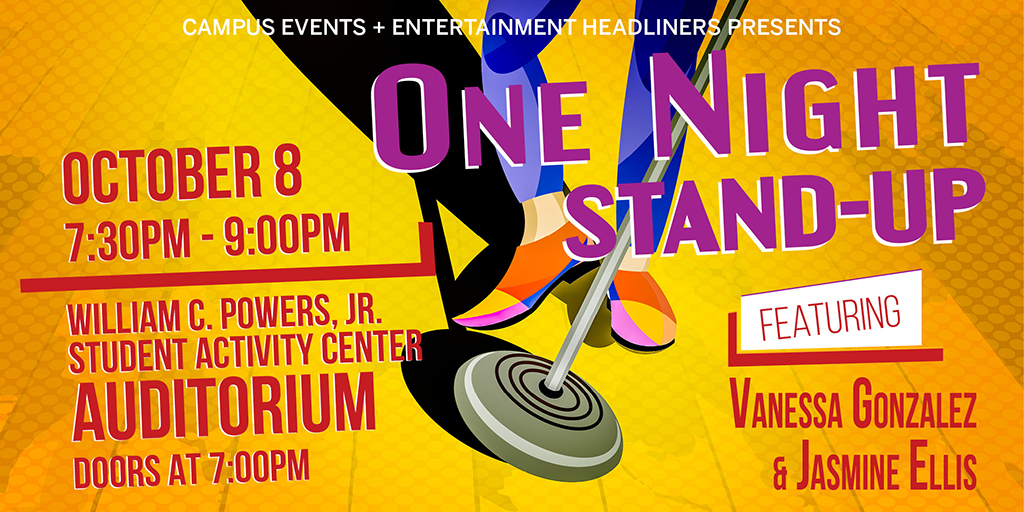 Jasmine Ellis's standup has been described as "energetic" and "joyfully neurotic," and she's pretty sure that was a compliment. After hosting local radio shows in college and interviewing comedians, she decided to try it herself in 2013 and hasn't looked back. Jasmine had performed in Las Vegas, New York, and LA, and earned spots on several festivals, including Moon Tower Comedy Festival, Bird City, Out of Bounds Fest in Austin, and and Blue Whale Comedy In Tulsa.  She's performed in comedy clubs, colleges, and good old fashioned dive bars across her native Texas. In 2017 she landed a coveted spot on the 3rd season of PBS Documentary-series "Stand Up Empire" which profiles Austin's top up and coming comedians.

Vanessa Gonzalez is originally from Texas and was voted “Best Stand-up Comic” in the Austin Chronicle before her recent move to Los Angeles.  She was a breakout as one of the New Faces of the 2017 Just For Laughs Festival in Montreal and subsequently created and starred in a webseries called "Ms. Vanessa" for Mas Mejor, a digital platform that is part of Lorne Michael’s company Broadway Video. She was recently featured on TruTV’s "Laff Mobb’s Laff Tracks" and has a half hour stand-up special for Comedy Central and a short special on HBO Latino airing in 2019. Vanessa has also performed at a variety of comedy festivals including SXSW, High Plains, Moontower, and Big Sky Comedy Festival. ​