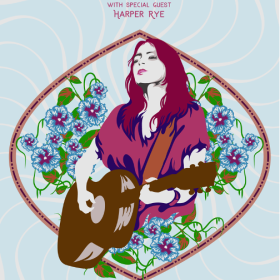 Nichole Wagner took the long way around to answering her calling as a singer-songwriter. Originally from Colorado, she moved to Austin after college, lured by the city’s famous live music scene. She fit right in with the songwriting community from the start, albeit for years only observing from the periphery as a photographer and music journalist. She released her first EP, “Plotting the Constellations,” in 2017, followed a year later by “And the Sky Caught Fire”, the full-length debut that established Wagner “as one of Austin’s most promising young singer-songwriters” — as noted by Austin-American Statesman critic Peter Blackstock.

Even more auspicious was 2020’s “Dance Songs of the Apocalypse”, an eclectic covers EP that found her busting outside of the Americana/folk box with dazzling panache. While the pandemic disrupted most touring efforts in 2020 and 2021, she focused her energy on writing and recording “Plastic Flowers”, a full-length record set for Spring 2023 comprised of candid and uncompromising originals. The record finds find Nichole confronting the heavier topics of childhood trauma, setting boundaries, and navigating the realities of life.