Texas Traditions plans and executes programs and events aimed at building UT spirit and pride. It does so by continuing traditional events started in the 1950’s and working to showcase the best of UT.

Applications for membership open at the beginning of the fall and spring semesters.

Check out our annual events: 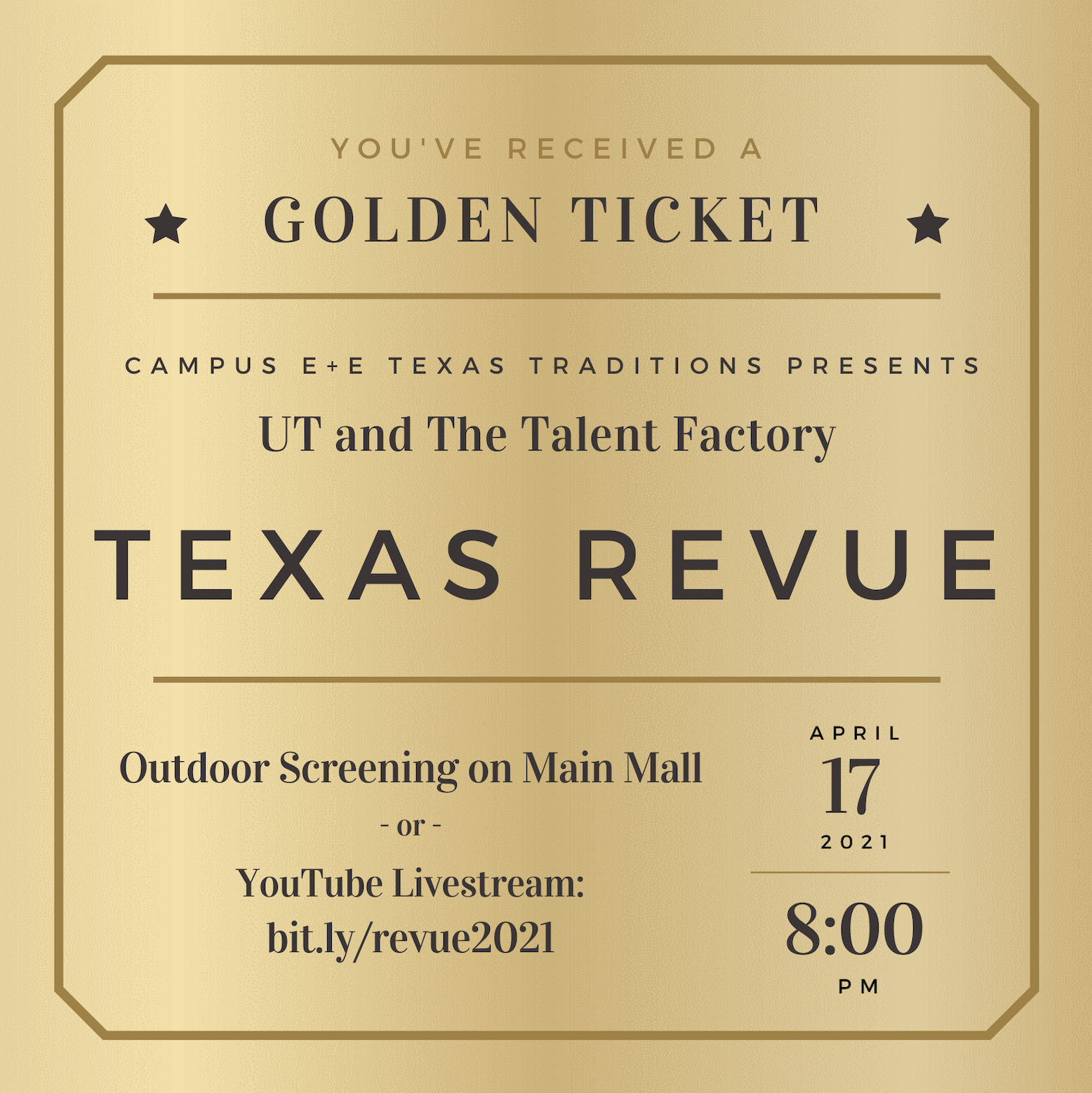 Meet the Acts for Texas Revue 2021

Texas Revue 2021 is taking place on Saturday, April 17, 2021. We have eight acts competing and one exhibition act featured in the show this year! Read about each of the acts below.

We are Absolute Pitch! Established in the Fall of 2018, we are UT's newest a cappella group. Our mission is to uplift female-identifying individuals and marginalized groups with our voices and presence on campus. We have performed at several events and places around campus and Austin, including: Trail of Lights, Cheer up Charlies, ASHA’s Talent show, and Breaking the Silence! We are so excited to share our voices with you!

Burnt Orange Bluegrass, aka BOB, is a student organization at UT dedicated to engaging college students in bluegrass and folk music. We can be found weekly at the Friday jam on campus, keeping with the ways of the grass. BOB is comprised of musicians with the hottest licks, best yodeling vocals, and straight-up bluegrass passion. These musicians are the best pickers at the University of Texas. We love the music we play, and we hope it radiates from the many strings on stage.

Elyce Burce is a third-year Actuarial Science and French major from Nederland, Texas. Her music challenges intimate boundaries and evokes vulnerability and self-compassion. Elyce aims to inspire self-honesty in her audience and promotes the practice of self-love. In February, she shared the virtual stage with David Archuleta. Elyce is currently working on a self-produced debut album.

FNC is a performing arts organization at UT Austin that specializes in dance, lyrics, and more!

Jackie Oliva is a third year advertising major that loves to sing! She has been singing ever since she was a young girl and pursued her love for music by participating in choir, show choir, and musical theater all throughout grade school. Today, you will find her loves to sing through ministry at her home parish and at the UCC on campus! She is thoroughly excited to be a part of something so special as Texas Revue where she can share what she truly loves doing the most.

Susannah grew up surrounded by the arts and culture of Austin, Texas. She booked her first music gig as a 16 year old at one of the most well-respected venues in Austin, Strangebrew Loungeside (sadly, now closed), and her music career has been building since. Susannah co-writes with her father, who brings a unique observer's perspective to her lyrics. Susannah's voice spills out effortlessly and is a complete powerhouse, but she still manages to capture the vulnerability of sometimes very personal lyrics.

This past Summer, Susannah recorded and co-produced two new songs in Nashville, TN. Since the release of these two songs, "Nobody Wants Me Tonight" and "Forgive Me For Not Loving You," Susannah dropped a self-directed music video and had been performing her new singles throughout Austin up until the spread of Coronavirus. She is now working on recording an EP, with her single “Backseat” being released later this Spring. All of her songs are available on all streaming services.

The Tommy Sanchez Band is a four-piece ensemble from Austin, Texas. The group mainly plays Texas blues, country, and rock as well as their own eclectic brand of original music (as can be heard on their 2019 EP “Blue Love”). The band has played various gigs over the past few years including shows at SXSW 2019, Love Goat, and the Kerrville Folk Festival. Featuring Tommy Sanchez on vocals & guitar, Evie McNeil on vocals & keyboards, Eric Estrada on drums, and Peter Kishler on bass, this band is guaranteed to set your toe tapping and the house a-rockin’!

Wushu is the Chinese term for martial arts, with Wu meaning martial and shu meaning the art of. Kung fu, or Gong fu in Mandarin, is actually based on the Chinese concept of hard work or excellence, but we tend to use them somewhat interchangeably, with gongfu usually being used I the US to refer to the more grounded traditional styles, but more on that later.

Founded in the late 1800s as an attempt to preserve Chinese martial arts culture and give them a structured, public foundation for people to practice, the contemporary sport of wushu has been a staple of Chinese cultural exports and is practiced by more than a million people across the globe. Today, it is a highly structured performance art that draws from traditional Chinese styles such as Shaolin quan from Shaolin temple, Taijiquan, Hung Gar, and so many more. These ancient styles range as far back as 2000 years and have been preserved and modernized for objective judging in modern competition.

Texas Wushu is a performance martial arts organization led by UT students that perform, demonstrate, and compete at a national level. Come learn more about a contemporary sport with ancient history!

Thank you to our Forty Acres Fest 2021 co-sponsors: Living the Longhorn Life, Texas Exes, and University Housing and Dining.

Check back in Fall 2021 for more information about next year's Forty Acres Fest!

Texas Revue is the largest and most diverse talent show at UT -- and it comes with a grand prize of $1,500! This annual tradition, now over 90 years old, showcases a variety of acts including dancing, music, and more unique acts like hula-hooping, Chinese yo-yo and more performed by student organizations and individual performers.

Check back in Fall 2021 for more information about how to audition for next year's Texas Revue!

Longhorn Kickoff is a celebration of Texas Longhorn football that includes a live watch party for an away game. This free event gives students a great place to watch the game on the big screen with friends, play trivia and games, eat free food and win prizes!

We celebrate our favorite mascot's birthday with cupcakes, cookie decorating, games, and a lot of Longhorn spirit!

UT Campus Events + Entertainment
utexascee
tune into tonight’s event with @halljohnsonTX !!! 🎸🎶 all happening on YouTube Live for the entire public to see! 🤩… https://t.co/usle5LSzBO
1 month ago

UT Campus Events + Entertainment
utexascee
3 days left until @halljohnsonTX performs for us all via @YouTube live!!! 🤩🎶🎸 Check out this link for more inform… https://t.co/rdmAjcGhgI
1 month ago

UT Campus Events + Entertainment
utexascee
Distressed from finals? Destress for finals! Share with us your finals struggles. The deadline to submit an entry… https://t.co/L72giwCXkH
1 month ago